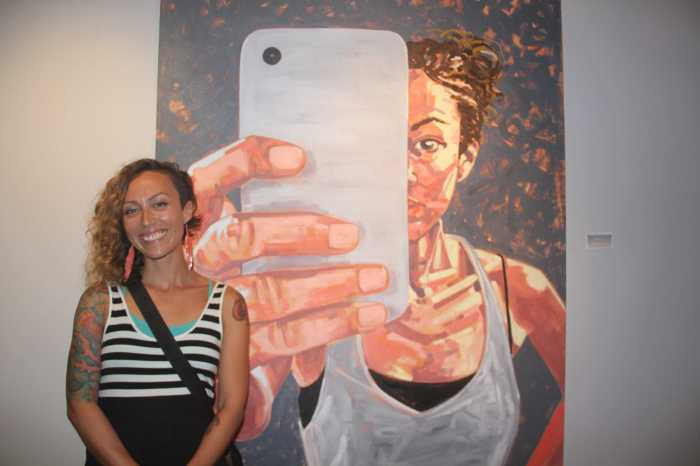 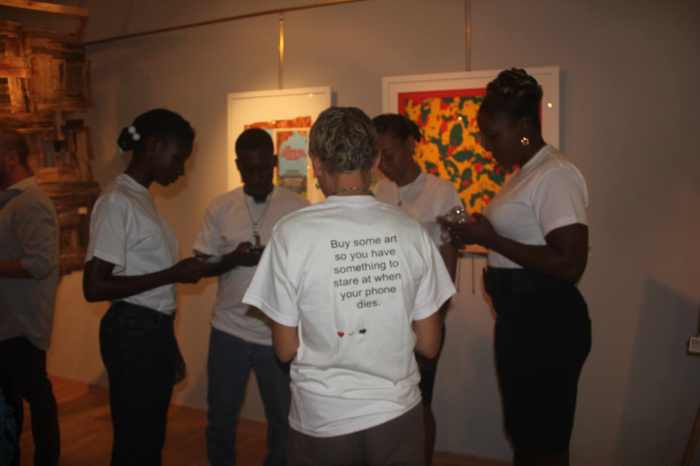 The Susan Mains Gallery at Spiceland Mall pulsed with Energy last Thursday evening as the exhibition of Grenada Contemporary 2015 was opened to the public. The work of the thirteen artists was found to be intriguing by the young, engaged minds of the many who came out to show support.
The call to participate that went out in early September called for work that reflected on Grenada’s current cultural response to technology. The work that came in did not disappoint. Photography, painting, installations, sculpture and video explored technology and culture.
Following on from last years Contemporary show, ten artists were first time participants. Of these ten, this was the first time ever showing their work Targhyl Thomas (Bob) (painting) and Alleon Alleyne (photography) John Henry, a relative newcomer, exhibited the largest painting that he has made to date. Jay Cambell depicted a carenage with an empty phone booth, which he termed “antique.” Christina Cornier showed the biggest selfie ever in a stunning painting. Two artists from London participated with prints, Frederika Adam and Tony Elahee originally from Grenada. Offering video work were Malaika Brooks-Smith-Lowe and Andrea McCloud. Seasoned artists Oliver Benoit, (photography) Suelin Low Chew Tung, (Installation) Rene Froehlich, (Sculpture) and Asher Mains (Installation) completed the roster.
As a part of the many explorations of technology and culture, of note was the varied use of materials. Wires that had wrapped up a little boy in Malaika Brooks-Smith-Lowe’s video were strewn across the floor. Bricks once again lay in a pile beneath Oliver Benoit’s photography. The surface of John Henry’s painting was embued with wire, looking like arteries and veins. Fibre glass flowed like a frozen wave in the sculpture of Rene Froehlich. Diamond dust sprinkled Tony Elahee’s print of a chocolate wrapper. Circuit boards from phones showed up in Suelin Low Chew Tung’s work. Asher Mains large installation was made entirely from the trunks of banana trees, dried, cut and sewn together to make panels representing the digital “glitch”. In the conversations that ensued during the evening several comments were made that included the sentiment, “I never knew you could make art with these things.”
An art performance was executed by the staff of the gallery. Five people with their cell phones strategically placed themselves in a circle between the viewers and the works of art. They stared at their blank cell phones for awhile, then moved off to stand in another inconvenient spot. The backs of their T- shirts read “Buy some art so you have something to stare at when your phone dies”. The interesting part of the performance was that it is such a normal daily occurrence to have someone blocking the view while they engage with the phone that many people did not even notice that a performance was happening. Another commentary of technology and culture.
This project by Curator Susan Mains is part of a continued effort to bring Grenada’s art to the international stage. Participation in the Venice Biennale and the Trio Bienal of Rio di Janeiro in 2015 for Grenada’s artists was a huge leap forward. The bar has been set very high, and it is the intention of all involved to make Grenada an island in the Caribbean that is known for its high level of artistic activity.
The exhibition continues at the gallery through December, 10-5 Monday through Saturday. Admission is free. 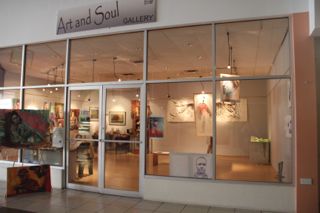