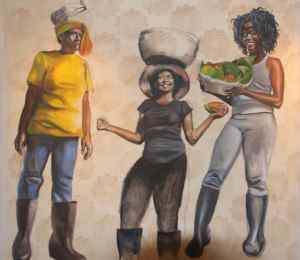 The three figures standing tall in Keepers of the Earth greet us as they invite us into their world. Substantial and strong, delighted with the produce they offer, they become iconic images of cocoa production in Grenada.

The large size of the canvas (96” x 88”) ennobles these cocoa workers, transforming individuals into nearly mythical personas, who themselves transmute the products of the earth into something precious and rare. Yet their images are not static, as Mains retains the pentimento of earlier brushstrokes, and through this expresses the process through which the image becomes whole.

Similarly, in Joanne, Grenada Cocoa Farmer (78” x 65”), the image appears larger than life as the figure rests smiling on a bag of cocoa. Set in front of the canvas are two actual bags of cocoa, and it becomes as if the canvas is too small to contain her vibrant personality.
By referring to the history of heroic portraiture in these images of cocoa farmers, Mains simultaneously opens up and undoes the old notion that agricultural workers are necessarily passive and downtrodden or, as in the work of French painter Jean-Francois Millet, romanticized peasants . Mains’ active figures have presence and personality; they remain individuals, yet express a collective sensibility and pride.
Mains speaks of his work as a kind of alchemy, and of cocoa workers, such as those depicted in his images, as alchemists. The notion of alchemy—which is to say, mystical exchange–runs through the show, framing the idea of transformation of one thing into something else, an endless cycle of change.
This sense of transformation is expressed in works such as Theobromine Market, Theobromine Girl and Theobromine Ritual, which utilize layering techniques to offer an impression of alternative worlds coexisting simultaneously. Desaturated images are overlain with washes of paint (which itself contains cocoa) and gold designs. Shadowy images appear in the background, giving the feeling of the layers of time that subtend the figures’ activities. 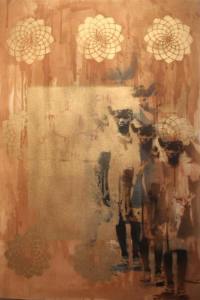 Within the European tradition, alchemists sought the legendary philosopher’s stone, and in particular its ability to transform base metals into gold. Historically, African alchemy was more interested in a range of materials and in the process of transformation itself. There was cross-fertilization between these different regions of the world, and the African origins of the alchemical ourobouros symbol–the snake swallowing its tail–is telling. With no beginning and no end, this symbol reminds us that existence itself is predicated on change, on transformation. The seed becomes the tree, the tree creates cocoa pods, the harvested pods become chocolate, and the cycle begins again.
Theobroma, the name of the cocoa tree genus, means “food of the gods.” And here the artist utilizes materials of the earth—pigments, gold, and, here, cocoa itself–to create images, which spiral out into the world. For the farmers, agriculture is a sacred process, as is art-making for the artist. For them, what they make is an offering to the gods. 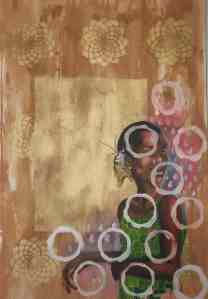 Particularly given the history of plantation agriculture in the Caribbean, the images in Society:Cocoa offer an alternative picture of agricultural production, and a promise of an ongoing and restorative transformation of the troubled past into a happier, and more equal and inclusive, future. Mains’ images open up a discussion on the possibilities for re-presenting this history. Stuart Hall reminds us that depicting “difference” is not a simple matter. In a racialized society such as Grenada, differences of class and colour are inevitably fraught, and embody difficult historical realities. The question of who represents whom, and for what purpose, is worth thinking through. Main’s work acknowledges that images across such divides must not only seek to undo stereotypes, but also to question the nature of representation itself—and of who has access to the art-making process and other tools of self-representation.
The powerful gold and cocoa dusted figures we encounter in Society:Cocoa embody the transformative energies of time itself. In this show the alchemy of Asher Mains and Grenada’s cocoa producers have come together to initiate topics vital not only to Grenada but to the Caribbean as a whole, and in the process give the world something truly glittering.

Deborah Root is a writer, curator and critic living between Canada‎ and Grenada. She is the ‎author of Cannibal Culture: Art, Appropriation and the Commodification of Difference, as well as numerous articles in international journals.